Let me start with an easier question: rappers and physicists – what do they have in common? Apart from the fact that I’m moderately passionate about both rap and physics, there’s one obvious similarity: rappers and physicists are both very active collaborators. I’d say that rappers feature in each other’s songs much more often than artists of other genres do and physicists, on the other hand, have sometimes up to several hundreds of co-authors in their papers! END_OF_DOCUMENT_TOKEN_TO_BE_REPLACED

Why I started this blog?

Every now and then I’ve thought about starting my own blog but only recently, when an idea of a blog focused entirely on data science issues crossed my mind, I really got excited about it as I could easily think of several projects I would want to tell others about. It also seemed like a natural timing as I officially started my doctoral studies last Thursday.

I have to admit that I’m quite lazy to follow other people’s blogs but, fortunately, I’ve decided to make this blog such that even I myself could imagine following it! 😉 This in mind, I’ve set myself three goals regarding what I should publish:

The first criterion should be relatively easy to meet as I’ve had an opportunity to work on many projects in my studies, work and free time that I think are really exciting!

What is Data Science?

At this point, you might be wondering, what is data science, anyways? Well, for starters it’s a buzzword somehow related to the fact that the amount of publicly available data has exploded and people have started realizing its potential to transform our society. This has led some people to talk about data as the “new oil”.

But to be more precise, I think Wikipedia gives a rather nice description:

Data science is the study of the generalizable extraction of knowledge from data.

So basically, we are trying to find meaningful patterns among a bunch of 0s and 1s. One could even say: we are Mining for Meaning from seemingly messy data. Term data science spans over several different disciplines, including data mining, machine learning, statistics, visualization, etc., and this actually suits me well as it provides nice flexibility when thinking about what posts would be relevant for this blog.

Let’s finally get our hands dirty. In this first post, we’re actually not going to analyze any data (except for some self-generated one) but we’ll rather take a look at two fundamental graph search algorithms, namely the breadth-first search (BFS) and the depth-first search (DFS).

I learned these algorithms back in high school where I was taught that I could solve a maze using either of these algorithms (there are, of course, many other applications as well). The BFS would go through the maze by extending the search uniformly in all directions, while the DFS would proceed along one path as long as it could until it found the exit or hit a dead-end, after which it would backtrack to the previous intersection and continue.

I wasn’t so much into maze solving so I started thinking what else could I do with these algorithms. One idea occurred to me – I could view an image as a graph where each pixel corresponds to a node and each node is linked to its neighboring pixels. Then I could try to color the picture pixel-by-pixel, using one of the two algorithms, not actually to search for anything but simply to go through the whole image. The idea was that when we first visit a pixel, we color it by calculating the average color of the neighboring pixels that have already been colored and by adding a small deviation to the average.

Using such a simple algorithm, I was pretty awestruck when I first ran the algorithm and the output was something like this: 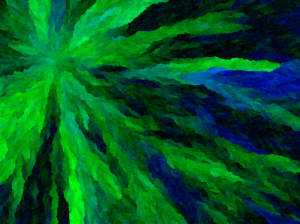 A picture randomly drawn by the BFS algorithm. 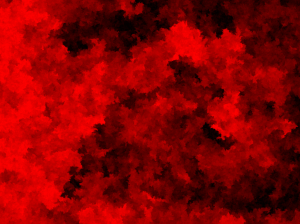 A picture randomly drawn by the DFS algorithm.

Then I modified the picture generating program so that it supports running several instances of BFS and DFS searches simultaneously with different parameters in order to get more diverse pictures. Here are two examples of what I got:

Mix of BFS and DFS searches. 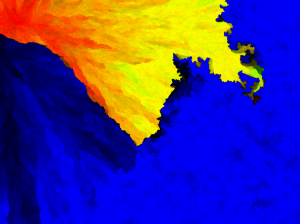 Finally, during the first year of my university studies, I put together a simple software that allows me to draw these pictures more interactively. Here’s a link to a video of that software animating the formation of a picture:

To wrap it up: a system with very simple rules can exhibit surprisingly interesting behavior!