Let me start with an easier question: rappers and physicists – what do they have in common? Apart from the fact that I’m moderately passionate about both rap and physics, there’s one obvious similarity: rappers and physicists are both very active collaborators. I’d say that rappers feature in each other’s songs much more often than artists of other genres do and physicists, on the other hand, have sometimes up to several hundreds of co-authors in their papers!

So they both have wide collaboration networks but the interesting question is what are the differences and similarities of these two networks. I took a closer look at this question back in 2011 when I was doing a project assignment for a course on complex networks and what I found was quite surprising! But before we actually go on to study these networks, let me say a few words about how one can get access to the networks. For physicists (or theoretical particle physicists, to be more precise) it was easy since the network was readily available on the Internet. For rappers, I decided to use Wikipedia since it has loads of articles about rappers (even though I restricted myself only to Finnish rappers) and in the discography section, the articles typically list “Guest appearances“. So I picked a popular Finnish rap artist and started following the links from this artist to other artists and so on. Doing this manually would have required huge efforts but luckily there’s an algorithm suitable for this kind of crawling tasks called the BFS search.

Wait, you’ve heard the name of that algorithm before? You’re right, it’s exactly the same algorithm I used in my previous post for graphics generation! Pretty cool you can use such a simple algorithm for such different types of tasks, don’t you think!

In practice we take all collaborators (neighbors) of the seed artist and add them to a queue. Then we start going through the queue, one artist at a time, take his or her neighbors adding them to the queue, and remove the artist from the queue. We make sure that we don’t visit any artist more than once which guarantees that the search terminates at some point. The resulting network can be seen below. (You can view a pdf version of the figure here and the same network from 2011 here). 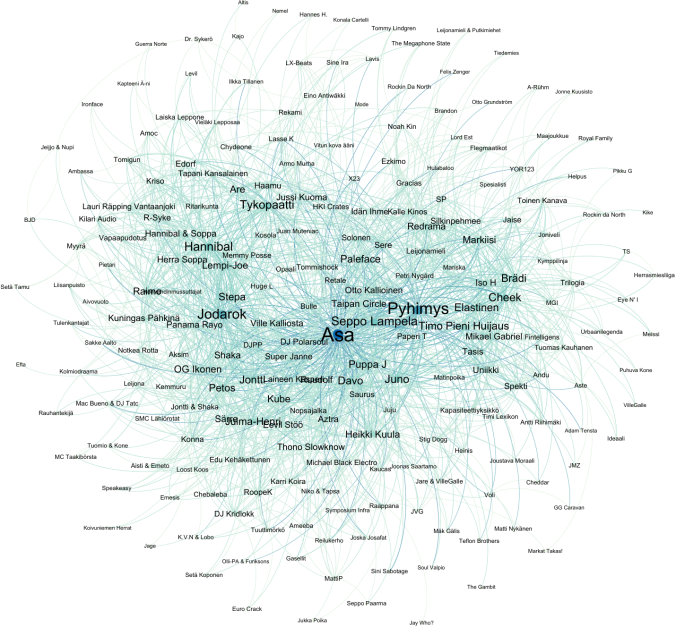 The search found a total of 315 rappers (most of which I had never even heard of!) but I removed the artists with only a single neighbor in order to make the figure at least somewhat readable.

In the physicist network there are almost 10,000 people so I didn’t even try to visualize it. And in any case, simply by looking at two networks, you typically cannot say too much about them. Therefore, I calculated a few graph theoretic measures to compare the networks. The degree distribution and clustering coefficient turned out to be very similar for the two networks. However, when I calculated the assortativity, to my big surprise, the networks showed very different kinds of behavior!

For the physicist network, I obtained r=0.268, which is in line with the data above, but for rappers the value was, interestingly enough, r=-0.127. This is illustrated in the plot below

This observation reveals us that, unlike so many other social networks, the network of rappers is disassortative! It means that the more popular a rapper is the less popular artists he tends to collaborate with. It’s not clear to me what makes rappers behave so differently from the rest of the people but below I’ve listed some potential reasons:

P.S. I recently discovered that a similar analysis has been done for U.S. rappers and can be found here. These authors also noticed the different behavior of rappers but in U.S. the effect appears to be weaker (r=0.06).